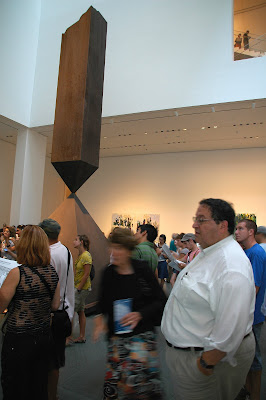 At the MoMA it was impossible to take an unobstructed picture of Barnett Newman's intriguing Broken Obelisk. So I moved around it a little bit until the voluminous rounded form of the man in the white shirt created a perfect counterbalance in this photo. I doubt he was a New Yorker because I have seldom seen such a concentration of fit people anywhere in the US. Walking is the number one mode for getting around and I was impressed by the number of gyms.
But to go back to the sculpture:
Barnett Newman was one of the most influential New York abstract expressionists. Like his friend Mark Rothko, he was beset by profound religious and philosophical concerns with which he struggled throughout his life to translate into visual form. Barnett Newman died in 1970.
This Broken Obelisk is one of three in existence, the second sited in front of the Rothko Chapel in Houston, TX, the third in the quadrangle of the University of Washington, Seattle. It is 26 feet high and made of cor–ten steel. It consists of a square base plate beneath a four–sided pyramid whose tip meets and supports the upended broken obelisk. The two tips have exactly the same angle (53 degrees, borrowed from the Egyptian pyramids which had long fascinated the artist) so that their juncture forms a perfect “x.”
Share |
Posted by Chris De Dier at 12:57 PM