This painting started with a laurel crown made of gold, displayed at the Metropolitan Museum in NYC. It probably was worn by a Roman Emperor with the title of Augustus meaning the elevated or divine one, somewhat less than a god but approaching divinity. It's a step lower than what was bestowed on Egyptian rulers, but I would be plenty happy with it already. Nevertheless, each direct descendant of a God that came to rule and/or convert the Earth, died just the same as all other ordinary creatures, no exceptions. What happened there?
As such, I placed a stylized adaptation of that beautiful and finely crafted laurel crown on a human skull, between the inscriptions God Is Dead, and There Is No God, loosely derived from the traditional British procalamation: The King is dead. Long live the King (which actually originated in France in 1422). The black background and crossed bones can be interpreted as symbolizing the collapse of a rich civilisation, freefalling into the Dark Ages; as a warning of the increasing fragility of our current lifestyles. There you have it.

Popular belief - voluntary or enforced - decides the faith in and of individual gods. Through the ages, they've come and gone like so many human celebrities, albeit with a longer lifespan. Their religions share similar characteristics with languages in how they evolve, merge, split into different factions, adopt alien influences, eventually disappear into forgotten meaning and importance, etc.
Religious iconography is distinctively interesting and often quite creative. Ancient cultures in particular had fun with it. It has become a rather stagnant art in our time.
I have used imagery of such artifacts in some of my work, not in an attempt to make any particular statement, but to use the same creative origin in different variations. Bovine deities have held important positions in different cultures. Here is my own version of one... a divine decapitated bull's head hovers in a starred golden sky, bleeding liquid gold, filling a calm ocean below, thus creating a new world... as good as any other story.

A Different View On A View

Same subject and basically same composition as the smaller painting in the preceding post directly below,... different treatment. In this larger format, I emphasized the formality and order of the landscape design and how its intelligently studied proportions manage to perfectly harmonize with nature. That is exactly why this view gained so much fame and continues to draw admiration through the centuries: great art is timeless.
This painting captures the landscape designer's intent by offereing a softer view than the smaller study provided.
The view is from the upstairs rooms at the Palais de Versailles.

Even after more than 300 years since its conception, one can only admire the composed grand vista offered by the "backyard" of the Palais de Versailles.
At the time when it was designed and created, the immensity of the project was supposed to underscore the control that humankind held over nature and how harnessing wild forest into symmetry and order reflected the power of king and government. Seen under the vastness of a hot summer sky, however, it shows that nature still prevails.

Don't get excited... or nervous, depending on your inclination.  This is only announcing a painting of an immense field with poppies and a distant mountain range on the horizon. And as usual in my work, it's not as much about the subject as it is a study or composition of eroding forms and colors under heavy atmospheric conditions; another perfect example of what I mean by painting transitive blinks.

Blame it on the economy, I guess? This commissioned painting hung for almost 2 months in the lobby of a newly renovated office building in downtown Austin until it became clear that the invoice wasn't going to be paid. As many businesses and self-employed people remain in surival mode, it was no pleasant news that this long anticipated sale wasn't going to materialize. However, in the end it remains to be seen who lost the most. No doubt the painting will eventually find another happy home, but what will ever happen to that wall?

Montclus is a well-preserved medieval village in Provence in the valley of the river Ceze, about 150 km northwest of Marseille. The village is situated on a hilltop by the river and surounded by dense woods. Across the river starts a trail that leads up into the hills. It's a good hike to reach the edge of this cliff, the highest point in the area, that offers a great view. I liked the dense fog that caused a sense of mystery and a feeling of being transformed to another time.

Mural, Mural On The Wall...

Not my first mural, but the debut in Austin, TX. This project consisted of painting the background for a sign at the entrance of a local architecture and design firm. I deliberately chose to keep the contrast low in order to allow the sign - a giant "hi" - to speak out prominently, rather than to compete with it for attention; and to subtly blend the freeform airy clouds into the sleek, elegant contemporary space. 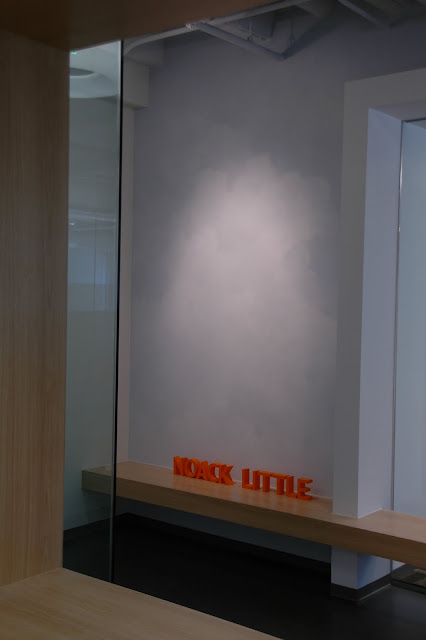 View of the finished mural before installation of the sign.