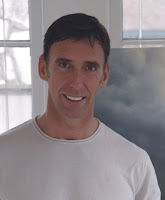 Welcome to my new blog!

I have no idea how it will take shape or if there will only be posts about my own paintings or if it will include the work of notable others...we'll see what happens.

I was born in Ninove, a provincial city in the province Oost-Vlaanderen in Belgium. When I was 4 years old, my family moved to the bigger city of Aalst, 15km to the North of Ninove, and there I grew up. I went to school at the St. Maarten Instituut in Aalst for 10 years and afterwards commuted to Brussels where I studied design and art history at the St. Lukas Instituut.

My parents owned retail clothing stores - dba CARINI - in Aalst and Ninove and I joined the family business in 1976. The window displays became soon my responsibility and eventually I accepted free-lance work for a few prominent stores in Antwerp, Brugge and Brussels. In 1984 I became fashion stylist for the Belgian magazine Libelle, based in Antwerp. It was an exciting job that provided front-row seats at the fashion shows in Paris and Milan.

But 2 years later, in January 1986, I moved to Toronto, ON and opened my own business. It was a womens' clothing store named Colyseum, located in Yorkville, an upscale shopping district in the city. I imported a couple of collections from Paris and designed for my own label. Three years later I opted to give my professional life a new direction.

The vast open spaces of the Canadian countryside appealed to me more than the city and I became experienced in the husbandry of horses, sheep and dairy goats (with close to 100 head-count herds), plus growing Christmas trees commercially on a succession of 3 different farms until 1996. It is during those years that I started painting seriously and began exhibiting my work.

In 1996 the chance presented itself to become an immigrant in the USA, and I moved to Wimberley, TX to become a hotelier with the purchase of the Wimberley Inn. It started out as a run-of-the-mill plain roadside motel that I changed during the following 10 years into a more attractive unique inn with better accommodations, more services and plenty of landscaped outdoor areas. A permanent exhibition of my paintings was on display in the lobby and conference room.

The hotel was sold in 2006, and I moved to nearby Austin, where I currently have a studio and paint as much as time allows. I am also setting up a new furniture design company called Arris Studio, and I have been working on the renovations of a historic house in Merida, YUC. For more on that, visit arrisstyle.blogspot.com
Share |
Posted by Chris De Dier at 11:49 AM